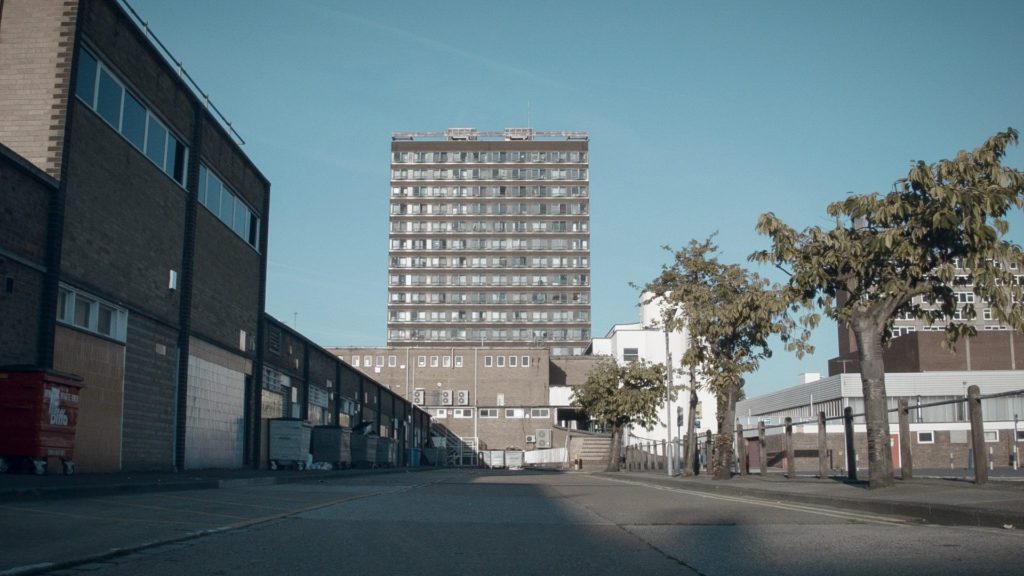 One wouldn’t generally associate Basildon with the term “utopia”. Having once worked there myself, I didn’t then consider it a place to be. Getting off the train I’d go straight to the bus station and get a bus to the Burnt Mills industrial estate, bypassing as much of the town as possible. Never once did I consider that bus station to be part of architectural history, or the industrial estate to perhaps be part of the reason the town was originally built without a train station. Basildon was one in the first wave of post-war New Towns. Instigated by the New Towns Act of 1946 and dubbed “an essay in civilisation” by the chair of the commission, Lord Reith, the New Towns were a major part of British post-war redevelopment. They sought to rehouse many of the displaced and urban poor by providing modern, rationally-planned urban spaces complete with houses, jobs and all a community needed to flourish. Being there today one can only ask: what went wrong?

Christopher Ian Smith’s debut documentary, New Town Utopia (2018) covers the history of the town through the eyes of its artists; from being an exemplary socialist manufacturing town, dubbed “Moscow-on-Thames”, to its decimation at the hands of the Thatcher government and her infamous right-to-buy council house policy. This is history through the eyes of people who have lived it, who continue to stick with the town and make something of it. Smith makes these people the focal point of his film; in the barren, concrete landscape, their voices really define what Basildon is, and what it could be.

The film alternates between portrait shots of its interviewees and atmospheric, slow-panning shots of Basildon’s architecture, eerily noble in their hauntological implications and reminiscent of Philip Larkin’s ‘Home is so sad’: “A joyous shot at how things ought to be, Long fallen wide”. These are sometimes overlaid with the voice of Lewis Silkin (played by Jim Broadbent), Clement Attlee’s Minister for Town and Country Planning, proposing the dream for "tomorrow's” new towns and the “new citizens” they will produce. Whilst bearing a certain degree of irony, the original utopian spirit is celebrated rather than ridiculed in these shots and herein lie the politics of the film.

The film shows how even before the Thatcher years the dream seems to have already been lost, demonstrating the contrast between planned vision and social reality. The interviewees make a point not only of architectural failures, but also of Basildon becoming a rough town, one estate even referred to locally as “Alcatraz”. Nevertheless, it is in this working-class atmosphere that a vibrant music scene could flourish (Depeche Mode its most recognisable cultural export), formed of a close-knit community of musicians and artists with a do-it-yourself attitude. The artists' oral history is alive to these socio-cultural nuances, demonstrating how a place is shaped by its inhabitants. From puppet-shows satirising the local council, to eccentric gravelly-voiced pub singers and surrealist painters, art is revealed as a sort of salvation for the town. This is a particularly potent message at a time when art is under threat from austerity politics; the suppression of arts is also the suppression of people’s voices, the ability to respond to your environment, to make a place a home. The film draws attention to what role the government has, or should have, in making places, as facilitators rather than engineers.

As such, the arts community in Basildon is strangely congruent with the town’s past manifestation as a plotland settlement. During the agricultural depression of the 1880s, and coinciding with the building of the London-Tilbury-Southend railway, much of the land around Pitsea and Laindon was divided into small plots and sold very cheaply to East Londoners as sites for holiday homes. When the Blitz hit London, affecting especially the dockland boroughs of East and West Ham, many families evacuated permanently to the area. Built and added to overtime by their owners, the plotlands were organic, DIY communities organised from the bottom up. Termed “bungaloid growth” by the aesthetic critics like Clough Williams-Ellis, who had a particular, uniform vision of the English countryside, they faced a certain amount of cultural snobbery which endures even today: “Yes, you can have a place in the country, but only if you have the right sort of place in the country.”

Surprisingly enough, even though the plotlands were superseded by the centrally-engineered New Town, both forms of dwelling share a common cause. Both provided an escape from the east end slums; whilst the plotlands came with fresh air and freedom, the new town brought mod-cons and opportunity. Colin Ward notes how an anarchist sensibility informed a lot of the original town-planning concepts. Ebenezer Howard, who was responsible for popularising Garden Cities, and Peter Kropotkin both paid tribute to each other’s work. Peter Shepheard, working on the plans for the New Town of Stevenage, once recollected that

"I remember that when first working at Stevenage we felt it vital not only to get the New Town Corporation disconnected entirely from the treasury, but from the whole network of central government, by-laws and so on. The idea was to build in ten years, a new experimental town..." (Shepheard in Ward, 2011)

Whilst the concrete results differ greatly from these idealistic visions, this secret radical history is worth bearing in mind. Even the first general manager of the Basildon project, W. G. Knapton and his successor, Charles Boniface, wanted to incorporate and update the plotlands rather than completely erasing them to start over. It is only in execution and through continued governmental mismanagement that Basildon “failed” as a utopian project. In actuality, as Smith’s film shows, the communal, self-determining principles that built the town are alive and well in its inhabitants.

Art and culture, the creation of new stories and the retelling of old ones, are the lifeblood of places, and this is the take-away message of New Town Utopia. Ward lays out the role that government should play in this:

Smith’s film illustrates the failings of planned societies whilst demonstrating the need to retain the utopian spirit behind them. With an increasingly diverse population, we need to allow difference to shape places rather than uniformity, and art is the purest expression of this. New Town Utopia, with its clean, sparse visuals, coupled with a futuristic synth soundtrack show a side to Basildon I previously never thought to look for, perhaps it’s time to go back.

You can check out the trailer and find screenings for New Town Utopia here.

The quotations are taken from 'The Do-It-Yourself New Town' by Colin Ward in Autonomy Solidarity Possibility: The Colin Ward Reader (2011, AK Press)

For more on Basildon's music scene, check out 'Basildon Bond: Depeche Mode & The Essex New Town' by Sophia Deboick from The Quietus

Popular posts from this blog

September 13, 2018
In ‘Postscript on Societies of Control’, Deleuze marks the passing of the “Disciplinary Society”. These societies operated on localisable, hierarchical topologies idealised in the model of the factory: ‘bringing everything together, giving each thing its place, organizing time, setting up in this space-time a force of production greater than the sum of component forces’ (Deleuze, 1995: 177). Their passing signifies not just the “breaking down” (Deleuze, 1995: 182) of old institutions, but the introduction of the “Control Society”, characterised by ‘ultrarapid forms of apparently free-floating control that are taking over from the old disciplines at work within the time scales of closed systems’ (Deleuze, 1995: 178). The topology of these new mechanisms of power, unlike the centralized uniformity of the factory, are diffuse, molecular, and networked. Galloway and Thacker identify one of the characteristics of this society as the, ‘increasing everydayness of surveillance’ (Gallowa
1 comment
Read more

June 05, 2018
When we occupy a place, we are also in congruence with the past of that place. History, rather than a bland facsimile of a faraway land, thrives beneath the surface of every place with countless voices; conversations, songs, murmurs, whispers, cries and screams. They are all woven into the fabric of the here and now, they are that place. We bring the dead back to life through our dwelling in place through the multiplicity of interactions which situate us. The past haunts the present, and the present cannot exorcise this spirit, no matter how much it attempts to wipe the slate clean and start again. The silencing of these voices, the attempted exorcism of ghosts, is tantamount to a kind of violence, it can only create more voices which scream louder.   Growing up, I never thought of the Thames Estuary as a place where people would want to be, as a place with its own history. Your everyday environment is taken for granted, it seems to be merely a backdrop in front of whi
Post a Comment
Read more